One of the most common reactions used in chemistry is based on the reactivity of diazomethane, a chemical reactant first described in 1884 by Von Perchman, who generated it using nitrosoalkyl urethanes with alkali, and who lived to tell the tale. He was lucky as what Von Perchman may have found out is that diazomethane, once generated in a flask, has the tendency to explode, and has to be handled in the cold and with special glassware. 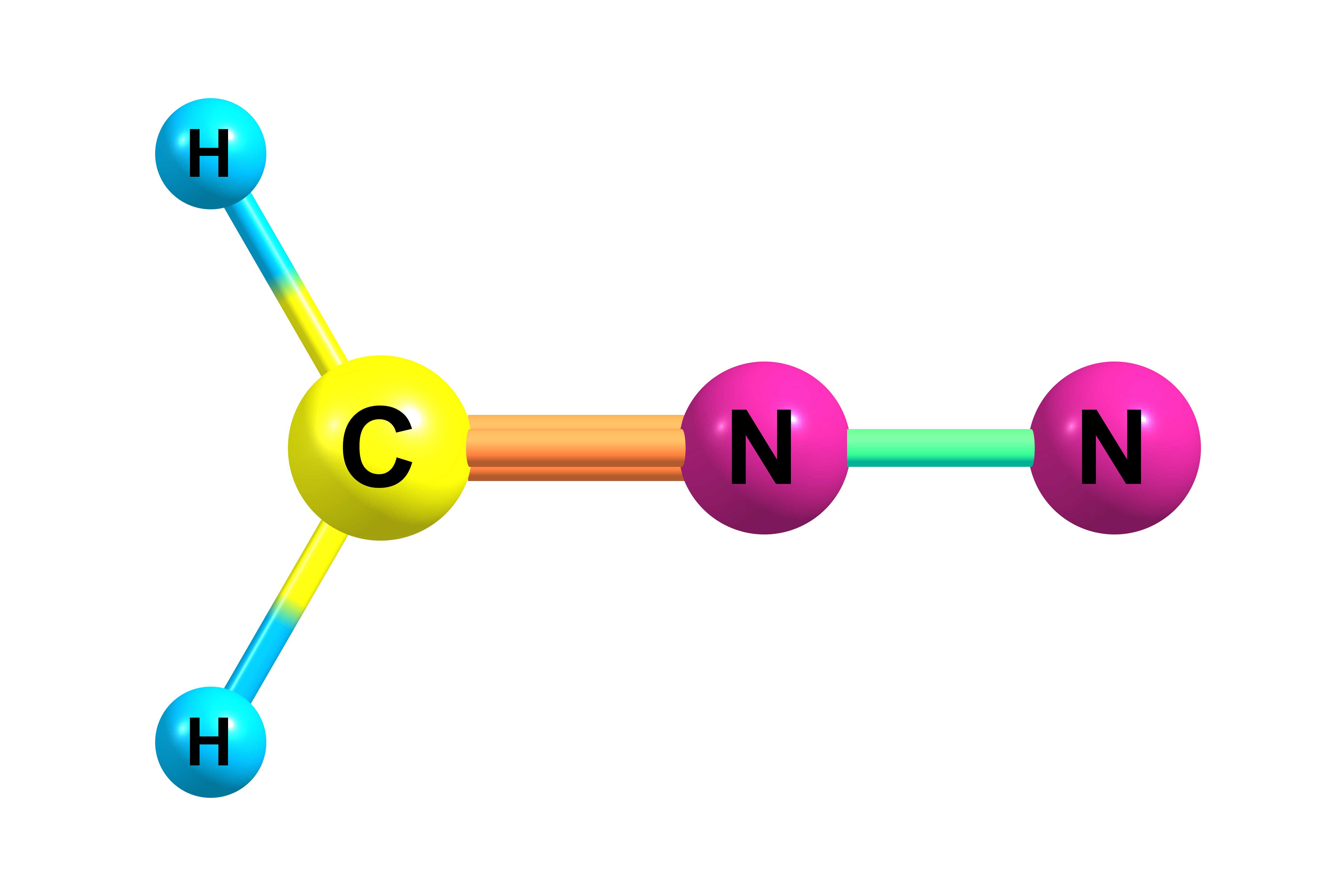 Today, this reagent still strikes terror in the hearts of students and organic chemistry professionals alike, but that did not stop chemists in 1914 at the University of Bristol, who bravely generated diazomethane as Von Perchman did and reacted it with the white milk protein casein and successfully being the first milk scientists to use the explosive mixture to permethylate the protein. This reaction with diazomethane was the first to generate a publication on the subject and again all lived to live to tell the tale in the literature, although no one has admitted explosions. Since then thousands of papers on the use of diazomethane, its toxic and explosive nature, and safety studies have been published and the scaffolds and substrates used in this reaction since that 1914 paper span the entirety of chemical diversity.

Diazomethane has been directed and reacted with the most simple linear alkanes to the most complex biological molecules and it is safe to say, if a molecule or substrate exists someone has exposed it to diazomethane at one time or another in scientific history, and again lived to tell the tale.

Handling the deadly- generated diazomethane is no easy task even today as here is what Pharma blogger Derek Lowe at In The Pipeline says about it- which sums up its reagent quirkiness and dangerous attributes. Dr. Lowe warns “That diazo group is looking for an excuse to revert back to nitrogen gas, which process comes with an inevitable no-substitutions side order of kaboom. The chemist’s job is to not give it that excuse”

Luckily for chemists and progress in the use of safer reagents the diazomethane reaction and job got much easier in 1983, when chemist Howard Black at the Aldrich Chemical Company used N-Methyl-N-nitroso-p-toluenesulfonamide and an alkali (potassium hydroxide) under controlled conditions to safely generate diazomethane. He was able to generate large amounts of diazomethane reliably and even store it for long periods of time to be used again. He even designed a special reaction chamber also sold through Aldrich called the Diazald Apparatus, allowing the chemist to generate large amounts of diazomethane and transfer it to reactions, which is still sold today. In his work Black found that if less than 1 mM of diazomethane is needed there is another reagent available that can do the reaction, N-methyl-N'-nitro-N-nitrosoguanidine (NMMG) that one could use, and for larger amounts and even in large-scale processes Diazogen could be used in reactions of > 100 mM. Using these reagents chemists everywhere now could safely generate diazomethane, and subject it to reactions with every molecule and biological substance they could think of, to study their structures, function in biology, and to create new drugs and molecules for commerce. Dr. Black took the fear out of generating diazomethane and since then his reagents and methods are now used worldwide and in small and large scale chemical processes.

The reagent that Dr. Black discovered useful, N-Methyl-N-nitroso-p-toluenesulfonamide, is well-known now as Diazald and/or Diazogen, and it is a widely used for the generation of diazomethane. As a readily usable and versatile reagent it is used is organic synthesis to add methyl (CH3) groups to molecules and methylate complex organic molecules such as fatty acids, phenols, heterocycles, DNA, RNA and a myriad of chemical scaffolds generating new compounds and analytes for chemical analysis.

Since its discovery, Diazogen is found react with many different functional groups, two which are outlined below, where it reacts with free carboxylic acids and phenols to generate methylated carboxylic acids and methyl ether phenols readily and quantitatively. In this way complex mixtures can be prepared for chemical analysis, and now methylated, volatile analytes are readily prepared for using GC-MS techniques, for example. 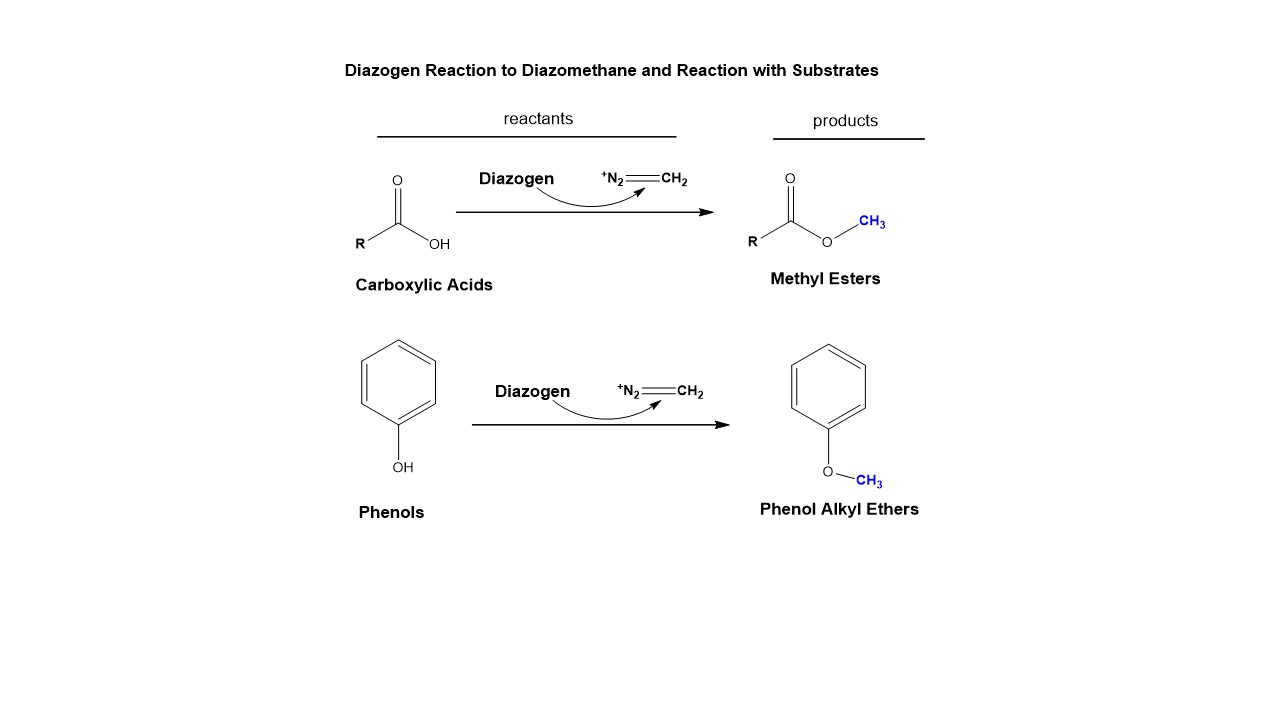 Using these methods and reagents one can also explore the analytical chemistry of metabolites in biochemistry, and small molecules such as lipids, and even complex biomolecules and unesterified substrates are readily detected as the methyl esters using Diazogen in cellular extracts, greatly expanding our scientific understanding of biological compounds and metabolic processes.

CP Lab Chemicals is one of the most trusted suppliers of the Diazogen/Diazald reagents, N-Methyl-N-nitroso-p-toluenesulfonamide (CP-30261311-50g, CP-30261311-25g) and the alkalies and inorganic bases (Potassium hydroxide) needed for this reaction and they are available in different pack sizes for your convenience. CP Lab Safety also supplies a complete line of personal protection equipment one needs for this reaction- from goggles, face shields to chemical resistant gloves to lab coats. Everything from chemicals to safety equipment-all in one stop!

Our complete line of chemicals and safety gear will allow you to perform the generation of diazomethane, as Dr. Black did almost 40 years ago, and its successful reaction with your favorite molecule or substrate is what we hope you achieve. The diazomethane reaction may be one of the oldest and most versatile reactions in the chemical and biological sciences, and it all starts with CP Lab Chemicals.

Please contact us and Ask A Chemist to help you- We Are Here for You!

CP Lab Chemicals will save you money, time, and technical headaches-our promise!

Black, H., The preparation and reactions of diazomethane, 1983, Aldrichchimica Acta 16(1):3

Blog Post In The Pipeline, Science, 30 April 2008, Derek Lowe, How Not to Do It: Diazomethane