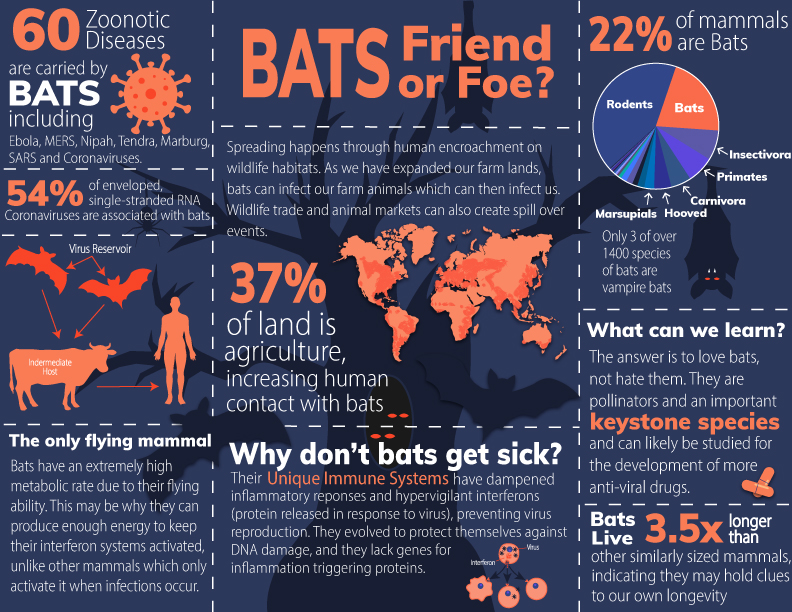 Why are bats a symbol of Halloween? Mostly because of vampire bats, which actually make for only 3 out of over 1400 species of bats. People tend to think that vampire bats are much more common than they actually are, and that they wish to feed on humans. In fact, they prefer to feed on cattle and very rarely bite a human. There are some valid reasons for fear of bats, and there are also plenty of reasons to appreciate bats.

They are, in fact, efficient virus reservoirs and are known to spread some very serious and highly contagious diseases. These are typically spread to us through intermediate hosts, which are often our farm animals. Sometimes the intermediate host may be a Civet or Pangolin being traded in the wildlife market. As we encroach on wildlife habitat by increasing farmland and urbanization, we will continue to increase the possibility of contracting viruses from bats.

So, what’s good about bats? Plenty! For starters, they’re pollinators, making them a keystone species that is vital to the survival of our planet Earth. Without bats there would be no rainforest at all. Furthermore, they provide insect control. Mosquitoes are disease spreaders as well and there is no doubt that mosquito populations would be out of control if it weren’t for bats.

There is a lot we can learn from our flying mammals. Bats live 3.5 times longer than other mammalian species relative to size. This suggests that researching bats may provide us information on anti-aging and improving longevity. Researching them for development of anti-viral drugs could also prove highly useful. There are currently only about 10 effective anti-viral drugs on the market, out of over 200 viruses that infect humans. Bats have super unique immune systems that are unlike any other mammal, so finding out why they seem to be unaffected by most diseases (including cancer) could do wonders for our species.

We have long had a strained relationship with bats, and it has only gotten worse in recent decades. We must remember that there is much to appreciate about bats. If we can learn how to live in harmony with them and to protect them, there is a wealth of information that could be key to our own survival.