A Brief History of Halloween

Have you ever wondered why we celebrate Halloween the way we do? A number of traditions and superstitions came together to make October 31st a uniquely odd and spooky holiday here in the United States. Below we take a look at some of the origins of this day. 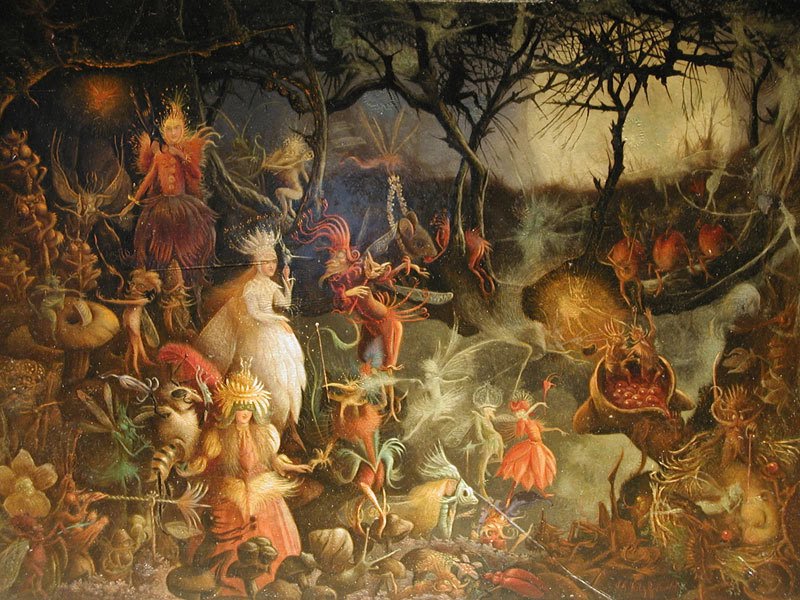 Today's Halloween is a veritable hodgepodge of traditions originating from various cultures and people across the globe. According to the History Channel, the basis for "[Halloween] is thought to have originated with the ancient Celtic festival of Samhain, when people [wore costumes] to ward off roaming ghosts." In the eighth century, Pope Gregory III changed "All Saints Day" from May 13th to November 1st and incorporated some of the traditions of Samhain into the traditional Catholic holiday, hoping to replace popular pagan traditions with church-sanctioned behavior. Over time other traditions and holidays were absorbed into the mix, diluting the original purposes of each but culminating in the unique and convoluted day of celebration that we all know and love. Even the term "All Hallows' Eve," which referred to the night before the Catholic "All Saints Day," gave rise through linguistic shifts to our modern word 'Halloween.'1 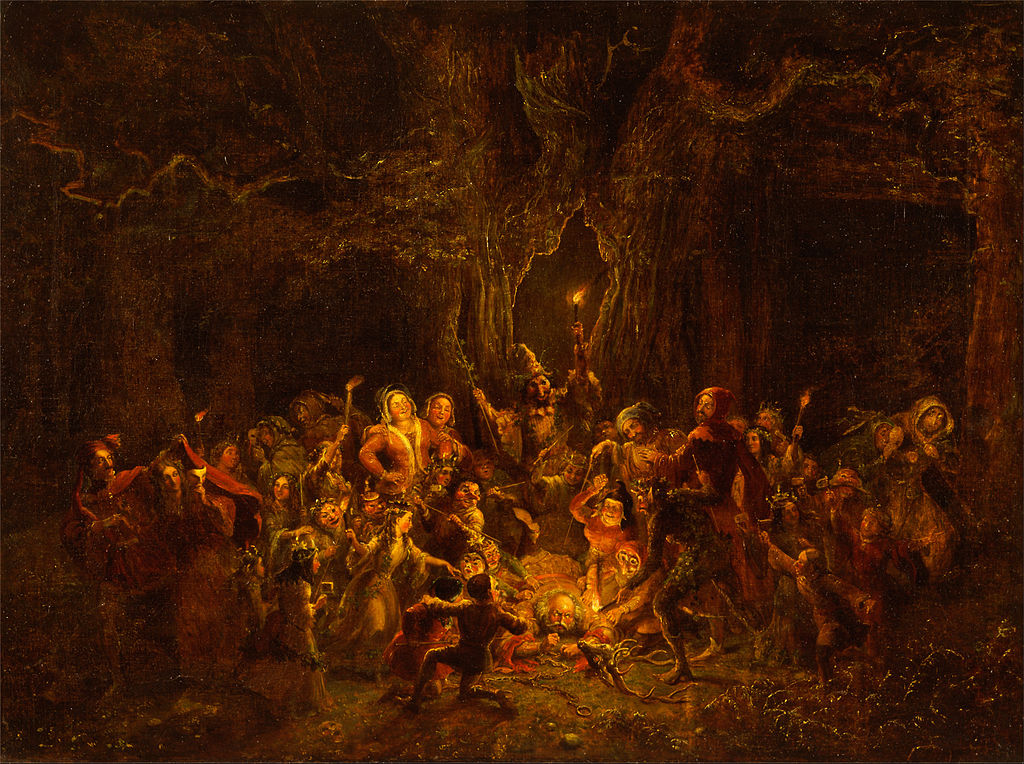 Let's go back to the beginning, when the first known ancestor of today's Halloween was born roughly 2000 years ago. During the annual harvest celebration of Samhain, Celtic people known as Druids donned animal heads and skins as part of their ghost-dispeling ceremonies. They danced around massive bonfires, making food and animal sacrifices to keep dark, other-worldly spirits at bay. Such spirits were thought to roam freely among humans only during a few short days as summer faded into winter. The spectacle is easy to imagine. Just by picturing the event you can understand how the roots of Halloween can go so far back in time. Naturally, pagan behaviors such as these were unacceptable to the Church, which over several hundred years strategically moved several religious observances to the same time of year and encouraged missionaries to slowly replace old pagan traditions with new Christian ones. 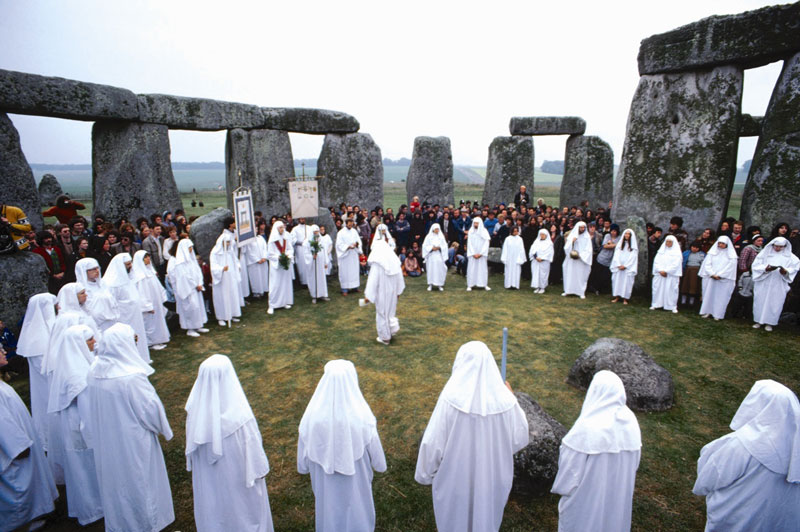 (Pictured above: A gathering of Druids)

The Romans occupied Celtic lands for roughly 400 years, and the changing of seasons from summer to winter was celebrated in both traditions, often linked to—or interchangeable with—themes of life and death. According to The American Folklife Center, "The old beliefs associated with Samhain never died out entirely. The powerful symbolism of the traveling dead was too strong, and perhaps too basic to the human psyche, to be satisfied with the new, more abstract Catholic feast honoring saints. Recognizing that something that would subsume the original energy of Samhain was necessary, the church tried again to supplant it with a Christian feast day in the 9th century. This time it established November 2nd as All Souls Day—a day when the living prayed for the souls of all the dead. But, once again, the practice of retaining traditional customs while attempting to redefine them had a sustaining effect: the traditional beliefs and customs lived on, in new guises."2

The entwining of the various celebrations over centuries makes complete sense as cultures converged. Druidic Samhain merged with Feralia (traditionally celebrated in late October) when Romans commemorated the passing of the dead, along with Pomona which originally took place in early November to celebrate the harvest. All Saints Day was added around 741 AD, and then in the early second century the Roman Catholic Church declared November 2nd to be observed as All Souls’ Day, attempting to further dilute pagan traditions by shifting the focus away from Druidic spirits and toward honoring saints. Concepts of "Nature-and-Earth' evolved into 'Heaven-and-Earth' while polytheistic beliefs slowly merged and were largely replaced by monotheism and saints. Nonetheless, remnants of the original pagan traditions, such as wearing costume disguises and the belief that spirits temporarily walk among us, remain and continue to play a part in Halloween tradition. 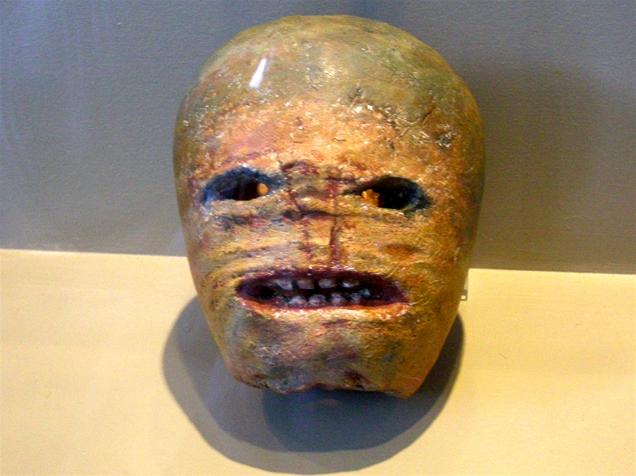 Other traditions along the way have also contributed to modern day Halloween. Why, for example, do we trick-or-treat for candy? There are a few possibilities. "Belsnickling, derived from the German mumming tradition of Peltznickel, was a Christmastime tradition in German-American communities where children would dress in costume and then call on their neighbors to see if the adults could guess the identities of the disguised guests.[The] children were rewarded with food or other treats if no one could identify them."2 Alternately, Mental Floss suggests that, "Going around the neighborhood for goodies may be an offshoot of souling, which started in the Middle Ages, also in the British Isles. Soulers, mostly children and some poor adults, would go to local homes during Hallowmas and collect food or money in return for prayers said for the dead on All Souls’ Day. A secular version of souling, called guising, eventually sprang up and is first recorded in Scotland in the 19th century. Guisers went door to door and earned food treats or money by offering a small performance, like telling a joke or singing a song. Some accounts of both these traditions make note of “fantastic costumes” that borrowed both from Samhain and British mummery. (They also mention soulers and guisers carrying vegetable lanterns, precursors to the jack-o’-lantern.)"3 Even bobbing for apples can be traced directly to the Roman invasion of Britain and their celebration of Pomona.5 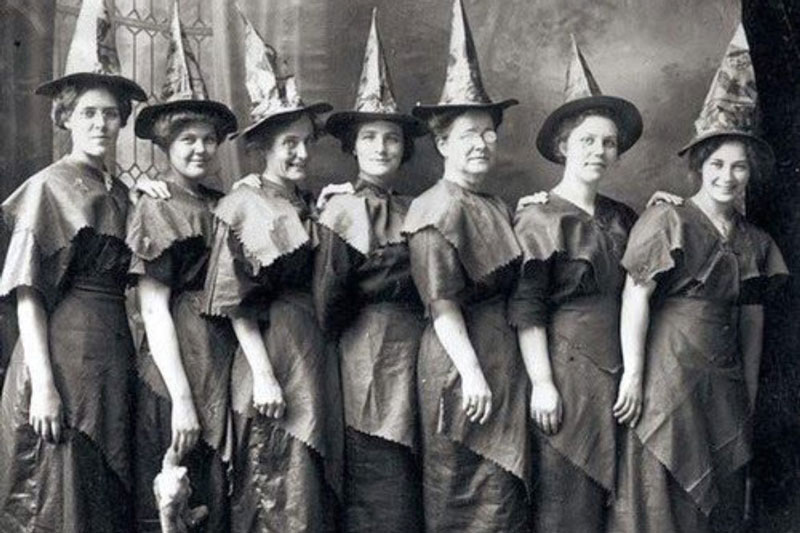 Officially, "Trick-or-treating didn't start in the United States until World War II, but American kids were known to go out on Thanksgiving and ask for food—a practice known as Thanksgiving begging." Mental Floss reports that, "In 1927, a newspaper in Alberta makes the first recorded use of “trick or treat” (“The youthful tormentors were at back door and front demanding edible plunder by the word 'trick or treat' to which the inmates gladly responded and sent the robbers away rejoicing”), and the term and the practice spread throughout the 1930s. After a lull caused by WWII sugar rationing, trick-or-treating surged in popularity in the 1950s, and became enshrined in pop culture with appearances in national media like The Jack Benny Show and Peanuts comic strips."4

The American melting pot of European immigrant cultures appear to have contributed many disparate elements to this unique holiday, with documented contributions from English, Irish, Scottish, Druidic Celtic, Catholic Roman, Canadian, Scandinavian and German communities at the very least, and likely many others as well. According to author Ruth Edna Kelley's The Book of Hallowe'en (1919), "All Halloween customs in the United States are borrowed directly or adapted from those of other countries".5 And so it seems, once we delve into the history of each element. This Halloween we will participate in traditions passed down from thousands of ancestors, with hundreds of variations, from dozens of belief systems.