Manufacturing of pharmaceutical chemicals and related goods is starting to trickle back to the U.S.

IN 2006 the industrial chemicals company Lanxess disassembled a hydrazine plant at its Baytown Texas location put the 3000 resulting parts on a boat and shipped the whole thing to Weifang China. There the company reassembled the plant and reopened it.
At the time Lanxess' move seemed emblematic of the rise of China as a manufacturing location at the expense of more costly and highly regulated countries such as the U.S. Lanxess said demand for hydrazine was shrinking globally but growing at double-digit rates 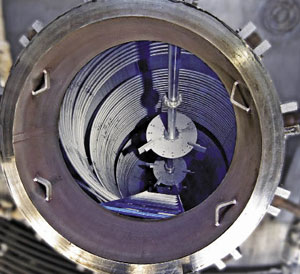 Three years later a recession is tightening its grip on the U.S. economy. Announcements of U.S. plant closings and workforce downsizing are almost daily events. At the same time the trend toward China and other low-cost manufacturing locations continues.
MAPI a U.S. manufacturers association surveyed members in January and found that 79% of them have not slowed their outsourcing to East Asia over the past two years. Only 15% of respondents relocated products or processes from East Asia back to the U.S. or northern Mexico during that period.
One of the reasons for the migration east is cost. The labor cost required to produce $1.00 of goods in China was about 20 cents last year MAPI says. That's up from 13 cents in 2006 but it is still less than the 48 cents' worth of labor required in the U.S. last year.
Yet amid the gloom a few stories have emerged of pharmaceutical chemical companies recommitting to the U.S. as a production location after a flirtation with China. Although they hardly make a trend these stories show that given the right circumstances some U.S. firms can compete against their counterparts in China.
More than two years ago executives at Pfizer CentreSource the third-party manufacturing arm of the drug giant embarked on a plan to shift some of the firm's bulk steroid production from Kalamazoo Mich. to two Asian firms: China's Shanghai Pharmaceutical Group and Taiwan's ScinoPharm.
Pfizer's Kalamazoo facility uses fermentation to transform soybean-derived sterols into a family of four building blocks that are then chemically converted into finished steroids. Although the fermentation half of that process boasts unique technology and economies of scale that only Kalamazoo can offer Jeffery W. Frazier vice president of global fine chemicals marketing for Pfizer CentreSource says the company figured it could synthesize the final steroids more cheaply overseas.
Pfizer worked with the Asian partners advising them on its environmental health and safety standards and preparing them for the transfer of some steroid-manufacturing technology. It pared down its steroid product line to a more manageable size and began informing customers of the impending change.
But as this process advanced events were unfolding that caused Pfizer executives to rethink their outsourcing strategy. The company realized that its new steroid partners would need to make additional investments in facilities and processes to meet both Pfizer's requirements and the agreed-upon timetable for production. "Looking at the combination of the investment that would be required the quality and environmental issues involved and the delays we decided to maintain production activities in Kalamazoo" says Michael J. Kosko president of Pfizer CentreSource.
Frazier emphasizes that the Asian companies are capable of turning out quality products to industry standards. "But Pfizer's own internal standards are quite high" he says. "It's an additional hurdle."

"Fortunately or unfortunately China has a middle class that's growing and costs that are growing."

Alerted that Pfizer had rethought its Asia plan Kenneth Ball Pfizer CentreSource's marketing manager for fine chemicals sat down with the Kalamazoo-based process technology group and launched a competition among the site's process chemists and engineers to improve the later stages of steroid synthesis. He set up four teams to develop new processes in parallel. The competition was fierce but it was friendly enough that the teams kept their counterparts apprised of what they were doing.
The result according to Ball was improved bulk steroid chemistry that's both cheaper and greener. In the synthesis of testosterone for example Pfizer scientists eliminated a hazardous reagent thereby allowing them to move manufacturing out of a specially controlled reaction vessel and into a more flexible general-purpose one.
Other recent changes at Pfizer also support the new approach to steroid manufacturing. The Kalamazoo site has been reaping the benefits of operational excellence programs implemented across the firm's manufacturing locations. As it turns out Kosko says these benefits were both important and timely. "They gave us additional options for competitive pricing after our outsourcing plans had changed" he says.
And Pfizer's formation of a new business unit for established productsâ€âits name for off-patent or generic drugsâ€âhas boosted the role of the Kalamazoo site within the corporation Kosko points out. "We have for the first time an organization charged with promoting and growing products that are off patent" he says. "With this alignment we have a strategic view of the future for the site."
Pfizer has piloted and validated the new steroid process Ball says and is now in the midst of its first full manufacturing runs. Customers have been receptive to the decision to stay home he adds. "It has to do with the Pfizer brand. We have an impressive facility and staff. Customers can see and talk to what's behind the product."
LOCAL PRODUCTION has always had an appeal and it may be growing stronger in these uncertain economic times. James Bruno managing director of Chemical & Pharmaceutical Solutions a New Jersey-based consulting firm confirms that some of his drug and biotech industry clients are turning to established U.S. manufacturers for their pharmaceutical chemical production.
Ironically one of the reasons is cost. Although long-term chemical manufacturing in China is often cheaper than in the U.S. establishing a solid relationship and ensuring quality and security of supply can involve expensive consultants and a lot of overseas travel.
Bruno tells of one emerging pharmaceutical company that does plan to outsource to China eventually. "But they feel in the short term that it will be cost prohibitive" he says. The cost of auditing a facility in China was one consideration Bruno says as was the additional time that could be required to scale up synthesis with a far-away contractor.
Another client a generic drugmaker recently canceled an order with a Chinese supplier and turned to a Western pharmaceutical chemical maker. "They were concerned they weren't going to get the quality they needed" Bruno says. They also worried that process development would take too long he adds.
Chinese regulatory authorities and the U.S. Food & Drug Administration are taking steps to improve the quality of China's drug supply in the wake of last year's heparin and melamine contamination scandals. Bruno agrees that these initiatives will eventually improve confidence in Chinese pharmaceutical manufacturers but he says the scrutiny could prove disruptive for potential customers in the short term.
For Ramin (Ron) Najafi an entrepreneurial chemist the safety or quality of Chinese goods was never a problem. He recently moved manufacturing of his company's product line from China to a California firm mainly because of costs. 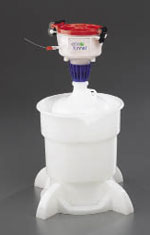 Najafi formed CP Lab Safety in 1996 while he was a researcher at Applied Biosystems a supplier of instruments and other tools to biotech researchers. By the 1990s chemists had abandoned the practice of dumping used organic solvents down the drain. Instead at Applied's labs and elsewhere they would pour spent solvent into jugs kept under the fume hood. But left in an open jug with a funnel on top the solvent would eventually evaporate up the hood.
Najafi came up with the idea for the Eco Funnel a high-density polyethylene device that screws into the top of the jug. Solvent that's poured in can't evaporate back out. Applied allowed him to patent the funnel and later agreed to buy some of them for its labs.
After two less than satisfactory earlier generations Najafi perfected an injection-molded version of the funnel in 2000. He turned to a contractor in China's Guangdong province to produce it because at the time prices from local manufacturers were too high. "You couldn't touch anything in the U.S." he says.
But as time went by prices and shipping rates from China kept escalating. Last year Najafi and CP's chief executive officer Kelly Farhangi decided to talk again with Wright Engineered Plastics a Santa Rosa Calif. firm they had worked with in their early days. They found that the cost of local manufacturing had become competitive with China without the hassle of an overseas relationship.
Wright is now gearing up to manufacture all 80 products in CP's line. Najafi says the move was motivated purely by economics. He never had a problem with the quality of the Chinese-manufactured funnel and says he is grateful to the companies in China that helped his firm get by in its early days.
"China makes good stuffâ€âthe iPhone for example" Najafi says. "But you have to keep on top of it and there is a cost to do this. You can handle it when you are a big company with a high-volume product but for smaller firms the economies of scale are not always there."
Barbara Roberts Wright's CEO contends that decisions like the one Najafi made are becoming more common. "I think there is a growing trend to either return to the U.S. or not take products overseas" she says. Buyers at midsized companies are factoring in shipping costs the logistics of container-load shipments and the expense of sending quality-control people to plants in China. They are concluding that small price differences aren't worth the hassle she says.
Najafi agrees. "Our manufacturer is now in our backyard. Communication is not an issue and we expect higher quality" he says. "I think a lot of American companies are missing out on this."
Bruno the consultant sees stories such as Najafi's as part of a larger turning of the tide in global manufacturing. "Fortunately or unfortunately China has a middle class that's growing and costs that are growing" he says. "China is also a large market. We should be looking at it as more than just a low-cost manufacturing site."