Titration is the process by which an unknown quantity of a compound is found by adding it to a reagent which it reacts completely with in a known amount. This reagent, the titrant, is measured exactly and when an added indicator changes color, the titrant amount and its concentration determine the unknown compound concentration. It’s the change in the indicator that signals the reaction between the compound and titrant is complete and when its complete its also called the endpoint.

In its most basic laboratory setup, the compound is dissolved in a solution flask while stirring, and usually the titrant is added to the compound using a burette, or biuret, in small amounts until the endpoint is reached. The amount of titrant added to cause an indicator change is then converted into the concentration of the compound found in the flask. 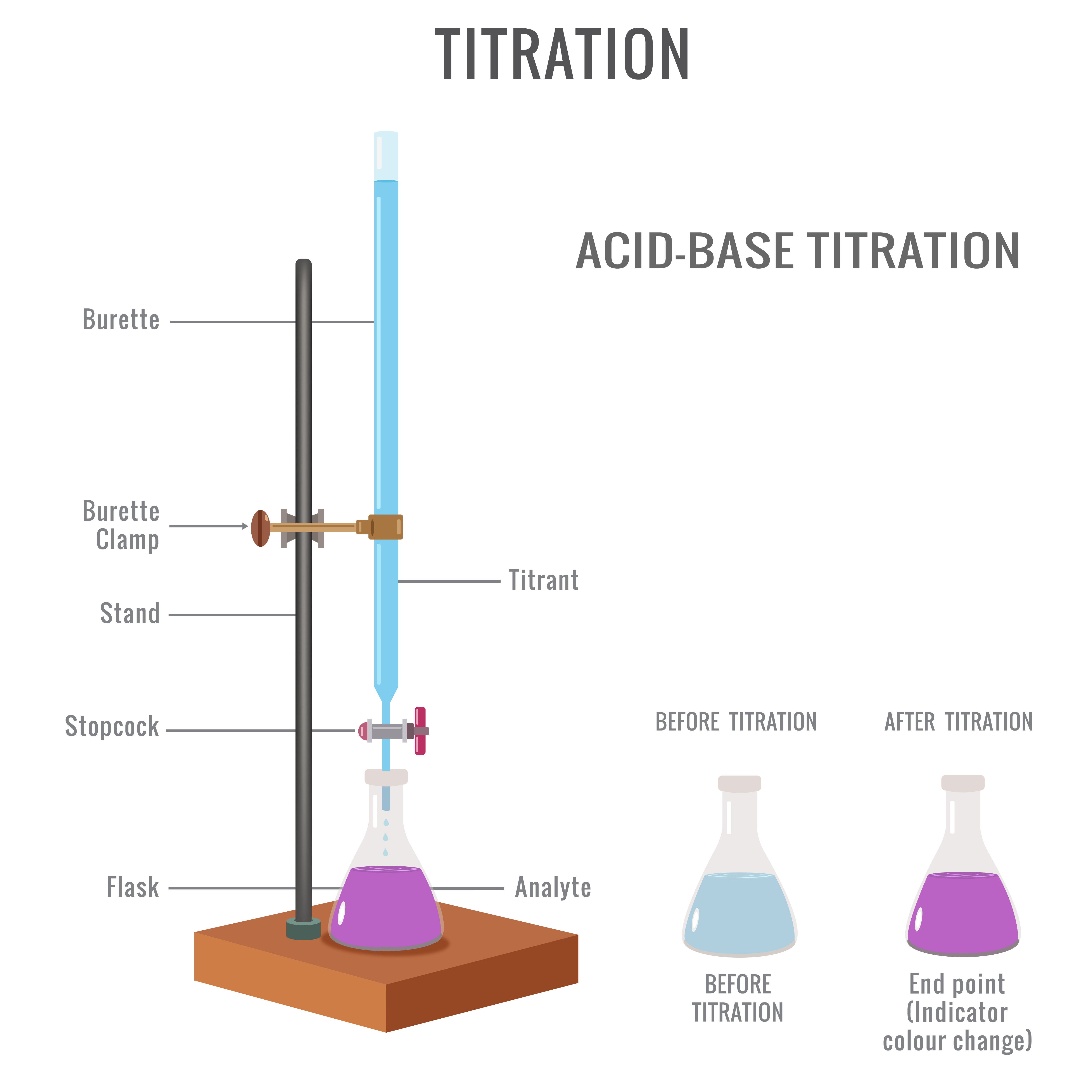 Depending on the reaction that occurs in the determination, titrations are classified as: acid-base, oxidation-reduction or redox, precipitation and complexation reactions.

Acid-Base Titrations This classic titration exercise taught in general chemistry laboratories uses visual color indicators that change color to show the end-point of the reaction, where phenolphthalein may be colorless in an acidic environment, changing to light purple when all the acid is consumed by the titrant, a base, that changes the phenolphthalein to a colored purple state when the acid equals the base concentration, at a neutral pH.

Oxidation-Reduction, Precipitation and Complexation Titrations Color indicators used in these categories are substances that are one color in reduced form, changing color in oxidized form or in the different states of precipitation and complexation, where color changes show sedimentation or complexation states.

Electrochemical methods of end-point determination use different types of electrodes in the titration flask, and voltage, current or resistance of the solution measured as the titrant is added. Similarly, spectroscopy and Ultraviolet-visible light absorbance can be utilized to determine the endpoint of a reaction as well. In all cases, the endpoints is determined from a graph of the property being measured versus the milliliters of titrant added. The resulting curves on the graphs show when the reaction between the analyte and the titrant is complete, and from these figures the concentrations of the analyte can be generated.

1.  Prepare Titrant: A reagent grade chemical is weighed accurately and dissolved in a volumetric flask to an exact           concentration and now is called a standard solution.

2.  A burette is filled with the titrant.

3.  An exact volume of the analyte is placed in a flask.

4.  An indicator reagent is added to the flask and the color of the flask observed.

5. The titrant is added slowly from the burette stopcock, shaking or stirring the analyte flask. As the color persists             then disappears, it is near the endpoint. One drop of titrant will change the color permanently.

6. Once the color change occurs suddenly and consistently, the endpoint is reached and the volume of titrant                   recorded.

All titrations that can be performed manually in this way can also be performed using automatic systems that are less prone to human error, and electronic measurement of analytes has greatly expanded into any chemical species capable of donating or accepting electrons to neutralizations and there are many different permutations to these methods. Such titrations using electrochemical methods are suitable for halogens such as chlorine, bromine, and fluorine as well as silver manganese, copper ions and numerous metal and ionic compounds.

Recent development in instrumental titrations have expanded into general acid-base applications, solid-state constant current titrators, automatic and electronically based titrators, and continuous analysis of gas and liquid streams. Once completed the data is compiled and the analyte concentrations calculated.

For organic compounds such as aliphatic amines or amino acids (see the table below) that are not soluble in water solvents such as alcohols can be used, as long as the solvent does not have basic functional groups that can interfere with the titrant. For organic acids not soluble in water the same rules apply when using non-aqueous solvents, that they are not acidic and capable of donating H+ protons. The table below outlines the types of organic acids that can be analyzed for their concentration.

Changes in light absorbance during titration can yield a variety of titration curve types, and are dependent on the wavelengths observed, and whether the titrant, analyte or reaction between the two are observed. In all of the titration curves the endpoints of both aqueous and non-aqueous with indicators show similar shapes, and acid-base, redox, and complexation titrations produce similar curve types. Rapid changes in absorbance are readily detected by eye if in the visible spectrum, and sensitive and selective determinations can be obtained when using photocells that are selective and suitable for wavelengths outside the sensitivity of the eye. Accuracy of these titrations is also increased, where values of variation of only 0.1% are common.

This method uses electronic (measuring of coulomb changes) or volumetric titration techniques to determine trace amounts of water in a sample and was invented by chemist Karl Fischer in 1935. 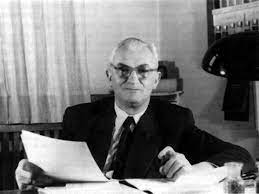 Today it is one of the most performed titrations used in the laboratory and commerce, where the water content of solids, liquids and gases is routinely performed for products in commerce, foodstuffs and medicines.

The components and reagents used in KF titrations include an anode titration cell, an alcohol, a base, and sulfur dioxide (SO2) and iodine (I2) as a titrant. Alcohols that are used include ethanol, diethylene glycol monoethyl ether, or methanol, and are sometimes called Karl Fischer grade due to their low or absent water content.

The titration cell has also immersed a cathode separated from the platinum (Pt) electrode by an ion-permeable membrane. Once energized, the potassium iodide forms iodine (I2) at the anode, which reacts with sulfur dioxide to form sulfur trioxide or SO3. This reactive sulfur trioxide reacts with water in the sample to generate sulfuric acid, H2SO4, and the endpoint occurs when excess I2 appears, and a sharp voltage drop is recorded. The amount of charge needed to generate iodine is then used to calculate the amount of water in the sample. 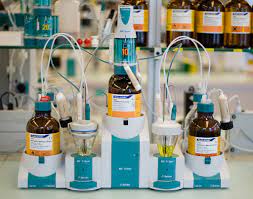 KF titrations are highly accurate and precise, within 1% of available water, and can use small amounts of sample to perform the assay, typically 0.2 to 20 mgs of material. KF titrations can be used for liquids and gases as well, with special equipment need for gaseous measurements and with glassware purged of residual surface water. Foods and viscous liquids such as syrups, lipids and foodstuffs such as chocolate, may cause some variations in KF titrations, as they release water slowly, and the use of a shear mixer may increase the accuracy of the results.

Use of Indicators in Titrations

Color indicator compounds are used in titrations, and the proper choice of an indicator will allow for more accurate and precise results to be determined. The most commonly used indicators are phenolphthalein and methyl orange, which undergo color changes during titration with a base, and litmus and even cabbage extract juice can be used, although these are used in classroom demonstrations of pH change and endpoints of titrations. The choice of indicator should correspond to the ionization range of the analyte in the assay, where the pKa value, the pH at 50% ionization, is used choose the correct indicator. 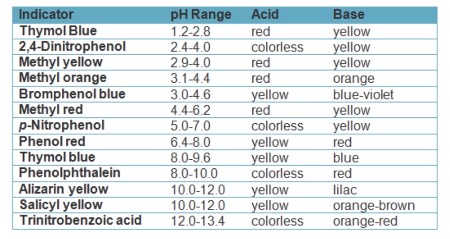 For redox titrations different dyes can be used to determine endpoints, and organic compounds that can undergo reversible redox chemistries include anilinic acid, diphenylamine, eriogreen, Nile blue and methylene blue.

For precipitation titrations the most common titrant agent used is silver nitrate (AgNO3) and are called argento (n.noun, silver) titrations, and typically analyze for halogens such as chlorine, bromine, fluorine and iodine where the amount of precipitating reagent as silver nitrate added is equal to the analyte concentration. Additionally, there are variations to precipitation titrations and called Mohr’s method, Volhard’s method and Fajan’s method, which use different reagents and endpoints based on changes in indicators and precipitation and analyte measurement spectrum.

CP Lab Chemicals provides all the necessary components for all different types of titrations, from indicators used to solvents and reagents needed for each titration category, and are provided in ASTM, analytical, spectroscopic and KF grade. Karl Fischer reagent solutions for pyridine-based KF titrations with sulfur dioxide added are also available as ready-made solutions. Titrant solutions pre-made are readily available and standardized and are ready-to-use, as are the complete spectrum of indicators used in acid-base, redox, precipitation and complexometric analysis.

We also have a complete line of analytical standards for comparison controls and in different concentrations that conform to ASTM standards and EPA Method specifications. Finally, CP Lab Safety supplies all the necessary glassware for volumetric analysis, from volumetric glassware to stir plates and mechanical methods of solution dispensing, from burettes to automatic pipettes.

For a directory of titrimetric methods from the American Society of the Testing of Materials please refer to this link at ASTM International, an independently run organization that creates methods and standards for material testing. For a fee a wide variety of titration methods can be downloaded for the analysis of compounds found in food, water, consumer chemicals and industrial materials.

To navigate and find what you are looking for to perform Titration analysis go to “Ask A Chemist” and we would be happy to help and serve you!