The most used chemical on Earth, besides water, is Sulfuric Acid, H2SO4, and the wealth of nations parallels their ability to produce sulfuric acid, where the more produced the better and stronger their economies are as an industrialized nation. 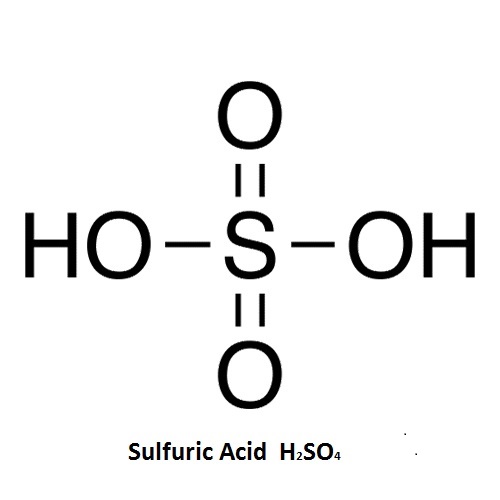 ou will find sulfuric acid in most of the products we encounter daily, in batteries, fertilizers and pigments found in paints, cosmetics and foods, to the production of steel, ore processing and even water treatment. It was so prevalent in developing processes that German chemist Justus von Liebig (1803-1873) wrote “We can accurately assess the chemistry industry of a country according to the amount of sulfuric acid it consumes”.

Sulfuric acid played a major role in the industrial revolution, where chlorine bleaching was accomplished by generating chlorine gas for the first time by combining sulfuric acid with table salt, sodium chloride, benefitting the textile industry and allowing for whiter clothing to be made from cotton. Sulfuric acid entered a larger market when von Liebig synthesized soluble acidic calcium phosphate (CaHPO4), which is soluble in water and makes an ideal fertilizer. This “superphosphate” became in demand in European farming, and today half of the sulfuric acid produced worldwide is used to produce fertilizers, making 100 million tons plus annually today.

In parallel, the German chemical industry (BASF) in the mid-1800’s embraced the production of sulfuric acid by producing it in large scale using extracted sulfur, and platinum or vanadium catalysts to generate sulfur trioxide, (SO3), which is reactive with water generating H2SO4 in what is known as the contact method of production. Today the contact method is the most used process producing 231 million tons of sulfuric acid in 2011-2012, with the top producers coincidently also being the top industrialized nations of the world. 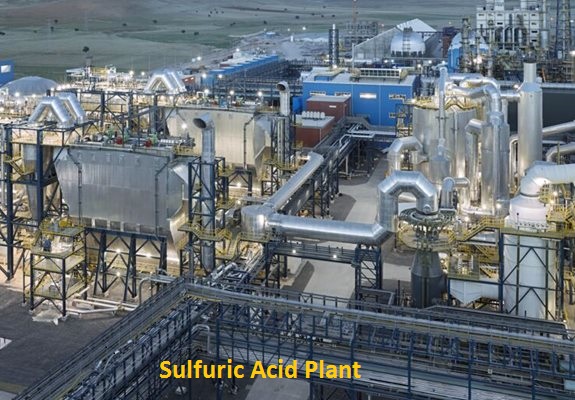 As a commodity chemical and in addition to its major use in the production of fertilizers, sulfuric acid is used in large scale for the production of metal and iron products, removing oxidation in a “pickling” process in rolled and billet metals for the automobile, construction and the textile industries. Another important use of sulfuric acid is the production of alum for the papermaking industry, helping coagulate pulp fibers into hard paper surfaces, while alum from sulfuric acid is used in water treatment plants to filter out impurities, improving the hygiene, safety and the taste of water. Its most encountered use by the lay-public is as a 33% solution electrolyte solution used in lead-based car batteries, and as the principal ingredient in drain cleaners, useful to clear hair and paper blockages that are readily broken down and hydrolyzed by strong acids such as sulfuric acid.

Sulfuric acid is extremely corrosive and gives off heat in an exothermic reaction in water, which is why burns with sulfuric acid are more serious compared to other strong acids. The standard treatment for acid spills on skin are to use copious amounts of water to flush the skin, and if in contact with sulfuric acid to remove physically as much acid and contaminated clothing if possible before washing, to avoid further burns from the exothermic reaction with water. Washing should continue for 10-125 minutes to cool the tissue area affected and prevent further cellular damage.

Solutions of sulfuric acid can be made by adding the acid to water, using the heat capacity of water to remove the heat safely. In contrast, adding water to sulfuric acid can lead to gaseous aerosols being formed by the exothermic reaction, roiling and splattering of the solution and the danger of a laboratory explosion. The cardinal rule of making diluted laboratory acids is ALWAYS ADD ACID TO WATER! Making solutions greater than 35% sulfuric acid (6M H2SO4) in concentration is inherently dangerous, and mechanical stirring and cooling in an ice-bath is needed to safely generate these solutions.

In some cases, sulfuric acid in contact with metals can generate hydrogen gas, which may explode in the presence of an ignition source, while gaseous sulfur dioxide, a by-product of the acid decomposition, can also be a fire hazard. Having a carbon dioxide (CO2) extinguisher at hand is preferred over water-based extinguishers due to the possibility of generating heat, hydrogen and aerosols with water.

As a corrosive hazard that can lead to burns on the skin, the aerosols generated can be damaging to the lungs and respiratory tract, eyes and mucous membranes , where exposure may lead to a delayed response including pulmonary edema in the lungs, or erosion of teeth due to chronic exposure. Currently, in the U.S. and worldwide, the permissible exposure limit (PEL) for sulfuric acid is 1 mg/m3, although lower amounts and exposures have been documented to lead to B vitamin deficiencies and changes in optic nerves related to loss of synapses and demyelination of neurons.

Although 100% concentrated sulfuric acid is possible, laboratory grade is 98.3% and is stable stored in glass bottles at room temperature, and bottles of this concentration possess a yellow cap typically.

Different grades and purities are available, where technical grade is impure and slightly colored, useful for fertilizer production, while pure grades such as US Pharmacopoeia (USP), NF (National Formulary) and Food Grade versions are available and are used for making dyes, pharmaceuticals, and products made for commerce, including foodstuffs, cosmetics and ingredients used in formulated consumer goods.

Other forms of sulfuric acid are possible, when sulfur trioxide is added to generate H2S2O7, also called pyrosulfuric acid, fuming sulfuric acid, or Nordhausen acid. Once formed with SO3, the concentration is referred to as “oleum” and is expressed as % SO3 or as % H2SO4, where common concentrations are 40% and 65% oleum. The oleum boosts the percent H2SO4 to 109% and 115% H2SO4, respectively. The oleum forms of sulfuric acid make it safer for transportation and they are used in the making of explosives and in advanced organic synthesis reactions.

Sulfuric acid has been used in crimes, and is found throughout novels and short stories as “vitriol throwing”, used to disfigure victims by throwing the acid into their faces, and was used by a gangster in the Sopranos television series as a form of torture. Englishman John Haigh ( 1909-1949) was known as the “acid bath murderer” when he killed 6 people and tried to dissolve the remains in sulfuric acid, destroying the corpses and evidence. He was still found guilty and died at the gallows. 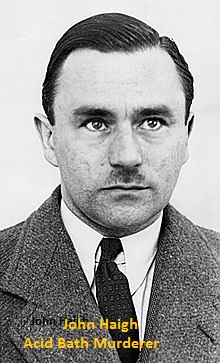 Less gruesome is the fact that sulfuric acid is a major component of acid rain, and is found in extraterrestrial environments detected in interstellar gaseous clouds, and exists as a cloud layer in the atmosphere of Venus, raining sulfuric acid onto its surface.

In its earlier years, sulfuric acid was also called “vitriol”, and the term “vitriolic” is found throughout the English language with synonyms related to bitterness, hostility, acrimony, anger and malice.

We supply sulfuric acid as Technical Grade, Reagent Grade, ACS Grade NF Grade (National Formulary), USP Grade, for consumer and production use. In addition, we supply APHA certified solutions meeting ASTM D1209 standards for water and waste water treatment analysis, having the highest regulatory standards for quality and purity. We also supply 0.255 Normal standardized solutions for Crude Fiber Analysis of Food and Feed, and in a variety of concentrations and normality (N), pre-made, standardized, and ready-for-use in the analytical laboratory.