Novato, CA - June 02, 2009 - In the midst of all the work--and networking--involved in attending AIHce, it is always fun, or at least interesting, to set aside some time to walk the Expo floor and take in the variety of products and services on display. It was during one such tour of exhibitors, many of whom have traveled from far and wide to be here, that we came across the booth of CP Lab Safety, a firm based in Novato, Calif. We found the company's story, and the product on display, among the more interesting so far today. (We'll be back with more reports in tomorrow's e-newsletter.)

CP Lab Safety was started in 1996 in the garage of Ron Najafi and Kelly Farhangi Najafi's San Francisco home. As a chemist and safety committee member at Applied BioSystems, Mr. Najafi (now chairman and CEO of NovaBay Pharmaceuticals Inc.) had become aware of the toxic fumes being emitted into laboratories from open containers, so he invented the ECO Funnel™ to do something about it, and the company was born. Since then, he and his wife have grown the company significantly, and today it sells 80 different ECO Funnel products, plus 3,000 other safety products worldwide.

As demonstrated at Booth 1328, though, the ECO Funnel, a device placed on top of open waste containers, prevents 99 percent of toxic fumes from being released into labs, protecting the health of workers and potentially the air quality and waterways. The product also is designed to prevent fires caused by ignited vapors as well as spills of hazardous wastes from the open containers. 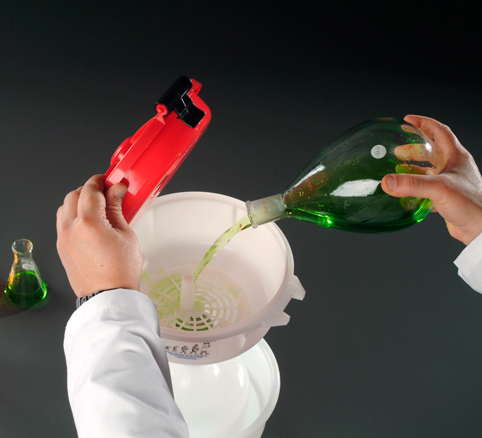 Representatives said that, as part of the company's commitment to a healthy and sustainable planet, for every ECO Funnel it sells, it donates $1 to American Rivers, a conservation organization that for more than 35 years has worked to protect and restore rivers throughout the United States.

The company invites AIHce attendees to visit Booth 1328 and enter a raffle to win several prizes, including a free 16GB iPod Touch that it will give away on Wednesday at 11:30 a.m. For more information, visit www.cplabsafety.com.