We all know air pollution is one of the biggest environmental challenges today, but not all of us are clear on just how big of an issue it really is. It is not only proving to be detrimental for the place we call home but is also currently a leading cause of death in humans worldwide. Right now, 9 out of 10 people breathe polluted air daily, causing millions of premature deaths every year. Stroke, chronic respiratory disease and lung cancer are among the many severe health issues that are attributed to air pollution. That’s why the UN recognized the importance of declaring an international clean air day, which they set as September 7th. California also implemented a state-wide clean air day 6 years ago, celebrated on October 6th. Both the UN and California have implemented educational events and promoting ways to spare the air. The UN states that if we don’t get on track by 2030, we could be looking at a 50% increase of premature deaths caused by air pollution by 2050. As announcements are being made about a “code red to humanity” regarding our climate, it is now more pertinent than ever to drastically change our ways and to reduce emissions as quickly as possible.

25 years ago, Dr. Ron Najafi was already recognizing the harm that polluted air can cause to our health and to the health of our atmosphere. Ron was a PhD synthetic organic chemist, and had noticed a huge problem in chemistry labs: they were allowing solvents to escape waste containers all too frequently. He also noticed that his colleagues were often dismissive about the obvious signs that their solvents were escaping the lab. When you are working under a fume hood with an open container, chemicals evaporate and can therefore easily escape the building and be released into the outdoors. He observed chemists frequently leaving waste containers open for days at a time and watched the level of the liquid in the bottles drop each day. This obviously meant that these waste chemicals were escaping to the outdoors.

Dr. Ron Najafi ended up inventing the Safety ECO Funnel to prevent chemists from breathing in toxic air in laboratories and to prevent toxic waste from escaping into the environment. He and his wife Kelly Farhangi put together the first prototype in their home basement. In the mid-90s, they were truly ahead of the game. “The key was to create a device that would allow a chemist to dispose of solvents just as easily as the current open funnel system but would not permit evaporation from the bottle.” Dr. Najafi said in an interview about the invention of ECO funnel. 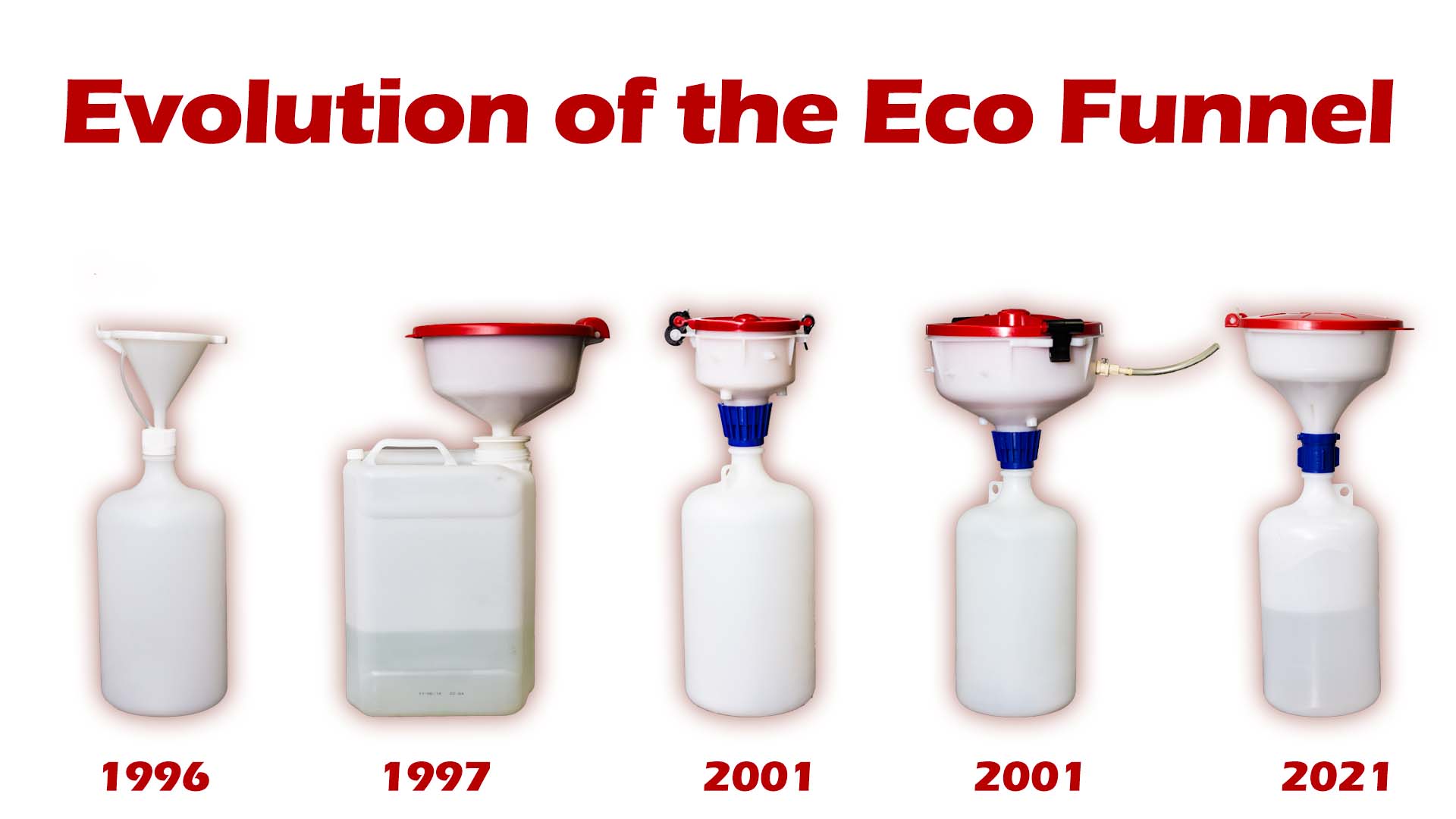 One of the biggest issues with laboratory solvents is that many of them have no odor at all, so lab workers have no idea how much pollution they’re breathing in daily. Even some solvents that do have an odor are ignored, as workers acclimate to them and therefore stop noticing the smell. This means they are also unaware of how much they are releasing into the atmosphere and contributing to the pollution of our planet.

Organic solvents are the most hazardous chemicals in most labs. They are often carcinogenic, neurotoxic and cause reproductive harm. Some of the most popular solvents, such as dichloromethane, could have a significant negative impact on the earth’s ozone layer and there has been a 60% increase in the amounts of DCM solvent in our atmosphere over the last decade. This is just one of the manufactured chemicals that is attributed to causing Ozone depletion, and yet its popularity is rising still. 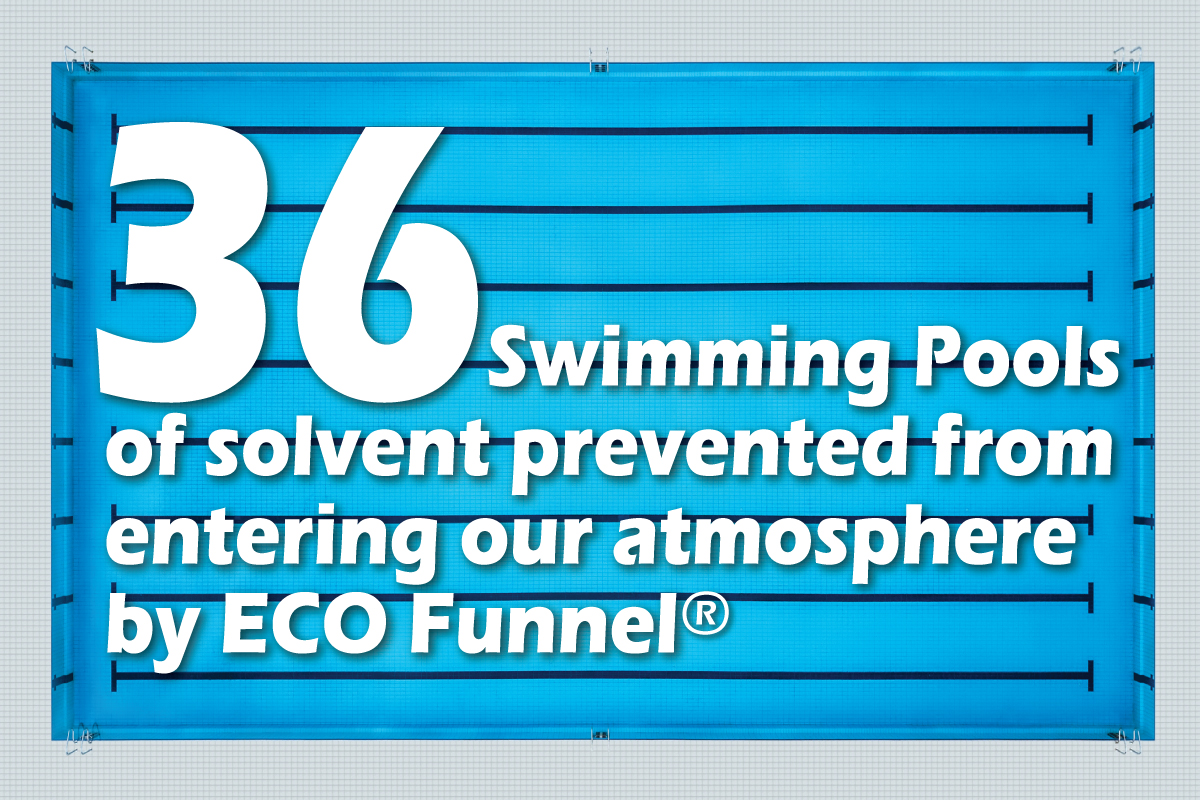 It’s obvious that this will continue to be an uphill battle. We’re doing what we can to be on the right side of it, helping reduce emissions from labs across the globe. Today, if you add up all the ECO Funnels that have been produced as CP Lab Safety has grown, we are currently preventing about 1,000 gallons of solvent every day from entering the atmosphere. Since 1996, we've captured more than 36 backyard swimming pools worth!

In the grand scheme of things, 36 swimming pools is not huge. However, preventing every possible drop of pollution makes a difference and every little bit helps. Everyone must come together to ensure our future on planet Earth. Our hope is that we can see ECO Funnels in virtually every chemistry lab around the world. Then, we could be keeping millions of gallons of solvent out of our atmosphere every day.